Aleca Zamm Is a Wonder

Meet the wonder-full Aleca Zamm, an ordinary ten-year-old with an extraordinary ability: she can stop time!

Aleca Zamm has finally reached double digits and she still doesn’t have a “thing”—a special talent or ability that will make her stand out. Her best friend, Maria, has a thing (swim team); her sister, Dylan, has a thing (singing); and even her former BFF Madison has a thing (soccer). But Aleca? No. Thing.

Until the day of her tenth birthday when Aleca discovers she can stop time just by saying her name. Suddenly, Aleca has a thing…and life is about to get a lot more interesting!

It turns out that being a Wonder (as her eccentric Aunt Zephyr, who is also a Wonder, calls it) comes with a few caveats, and that stopping time doesn’t go undetected by other Wonders or those who may be searching for them. With her new mentor Aunt Zephyr by her side, Aleca discovers that being special comes with special challenges she never expected. 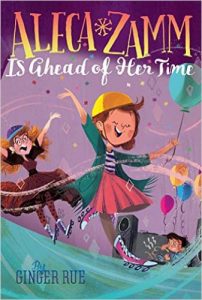 Aleca Zamm is Ahead of Her Time

Aleca Zamm, an ordinary ten-year-old with an extraordinary talent, is on a mission to find the other Wonder at her school and find out what their special power is in this hilarious follow-up to Aleca Zamm Is a Wonder.

Every roller-skating party has its pooper…

And for Aleca Zamm, that pooper is Madison, her former best friend and current worst enemy. But Aleca’s mom insisted that Aleca invite her entire class to her tenth birthday party at the skating rink—including queen-of-mean Madison!

What’s even worse? Aleca suspects that Madison knows about Aleca’s magical ability to freeze time. And that could mean over-the-top trouble for Aleca and Aunt Zephyr, her kooky teleporting aunt. There’s no telling what dangers await if news about their mysterious abilities gets out.

Between Aunt Zephyr’s risky roller-skating tricks and Madison’s threat of spilling Aleca’s secret, Aleca is sure that her tenth birthday party will be a total disaster! 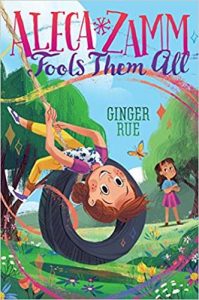 Aleca Zamm Fools Them  All

Aleca Zamm, an ordinary ten-year-old with an extraordinary talent, finds a new friend and has to rescue her Aunt Zephyr from a teleportation crisis in this hilarious third novel in the Aleca Zamm chapter book series.

Aleca Zamm knows she’s not the only Wonder at school with a magical ability. Third grader Ford Kimble is a Wonder as well. Ford is able to see people as they used to be in the past and as they will be in the future. He can time travel! Well, sort of!

Aleca starts hanging out with Ford to discuss their magical abilities, which makes Aleca’s best friend, Maria, jealous. Aleca even forgot the first meeting of the Secret Pals Club, Maria and Aleca’s new idea for a club that performs secret good deeds for bullied kids!

Aleca Zamm, an ordinary ten-year-old with an extraordinary talent, spends a day in the 1950s with Aunt Zephyr and Ford in this hilarious fourth novel in the Aleca Zamm chapter book series.

For Aleca Zamm, being friends with Ford, a fellow Wonder, means even more magical adventures! Ford can see things from the past and future, and when he sees a bridge that no longer exists in the present, Aleca can’t wait to investigate. Hand in hand with Aunt Zephyr, the three of them manage to cross the bridge and climb through a portal into the past.

Aleca, Ford, and Aunt Zephyr spend a day in the 1950s. At first, it’s exciting to see how things have changed, but time travel doesn’t come without snags! And when it’s time to go back home, they return to the bridge and find that the portal is gone! Will they be able to find a way home? Or are they stuck in the past for good?