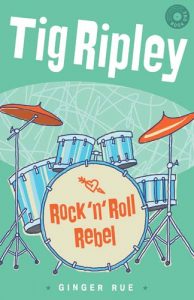 Thirteen-year-old Tig Ripley has plenty of good reasons for starting an all-girl rock band. Never mind she doesn’t play an instrument–she’ll figure that out. Fronting a band is sure to propel her out of the background and into the spotlight at her middle school. So after a few weeks’ worth of drumming lessons under her belt, she starts assembling her band. With her cousin Kyra agreeing to play bass, soon Tig has her piano-playing friend Olivia down for the keyboard. And then she convinces tough girl Robbie Chan to sign on as lead guitarist. With a cool name–Pandora’s Box–all the band needs now is a killer lead singer. How hard can that be? But when Kyra invites obnoxious diva Haley Thornton to join the band, Tig realizes snagging a lead singer–the right lead singer–is not going to be easy. Everyone says the drummer is the heartbeat of a band–does Tig have what it takes to lead Pandora’s Box? 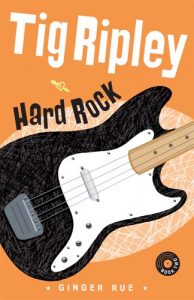 In this sequel to Tig Ripley: Rock ‘n’ Roll Rebel, things are looking up for the girls of Pandora’s Box. Following their successful appearance in the University of Alabama student TV commercial, Tig and the other members of Pandora’s Box are eager to be taken seriously as a rock band. But the high drama of middle-school life rears its head. First, the girls finally tire of Kyra’s lack of commitment and refusal to improve her bass skills. Tig can only defend her cousin just so much. Then to add to the Kyra problem, Robbie wants to bring in a new member to the band. This new girl really sets Tig’s teeth on edge. Is Tig losing her bestie status with Robbie? And now, topping everything off, Tig can’t stop thinking about Will Mason. Seeing him together with bandmate Olivia is agonizing. Tig is trying to do her best as leader but will all these struggles pull Pandora’s Box apart just when it looks like musical success is around the corner?